In our last discussion, we focused on the kernelized Stein discrepancy and how variational Stein gradient descent can be leveraged to sample from posterior distributions of Bayesian models. Our application area in that case was specifically Bayesian linear regression, where a prior (with a fixed precision) was placed over the linear coefficients of the linear model. Unfortunately, Bayesian linear regression is somewhat uninteresting because it is possible to compute the closed-form posterior for the coefficients. In this post, we’ll demonstrate two statistical models where this is not the case: logistic regression and Bayesian neural networks.

Before continuing, I wanted to discuss some of the software engineering considerations I made while writing this blog post. In particular, I decided to try to write a set of class objects for performing Stein variational gradient descent for a specified log-posterior distribution. The purpose of this software, which I’ve named Stein, is to provide an easy-to-use framework for performing Bayesian inference with Stein variational gradient descent.

Stein is very much still a work-in-progress and there is much that can still be done in terms of abstracting away complexity and advancing utility. Nonetheless, I wanted to show off what Stein can do in its current state. Therefore, I’ve chosen to archive the current state of the project on GitHub which will provide a working implementation of the examples in this post even as the project continues to evolve. Please check it out and feel free to contribute!

For future directions, I would like to expand this library to include a declarative interface for specifying the target distribution, very similar to what Dustin Tran has accomplished with the Edward library. I’m also interested in replicating the research that has been conducted on reinforcement learning and GANs with Stein variational gradient descent. Finally, I wish to eventually port Stein from using Theano to using Tensorflow.

We’ll begin with the case of logistic regression. Throughout this post, I’ll be drawing extensively from the experiments of Dilin Wang and Qiang Liu in the original NIPS paper on Stein variational gradient descent. For logistic regression, they choose to examine a dataset of forestry cover types, consisting of 581,012 example data points and 54 explanatory features. Because the dataset is so large, it is not feasible to estimate a logistic regression model using a second-order method such as Fisher scoring; instead, a first-order gradient descent procedure must be used. Formally, the Bayesian model for logistic regression can be expressed as follows, \begin{align} y \vert \mathbf{X}, \boldsymbol{\beta} &\sim \text{Bern}\left(\sigma\left(\mathbf{X}’\boldsymbol{\beta}\right)\right) \\
\boldsymbol{\beta} &\sim \mathcal{N}\left(\mathbf{0}, \alpha^{-1}\mathbf{I}\right) \\
\alpha &\sim \text{Gamma}\left(a_0, b_0\right), \end{align} where $\sigma\left(x\right) = \frac{1}{1 + \exp\left(-x\right)}$ and $a_0$ and $b_0$ are Bayesian model hyperparameters. The posterior distribution, therefore, can be expressed proportionally to the likelihood and the priors, \begin{align} p\left(\boldsymbol{\beta}, \alpha \vert \mathbf{y}, \mathbf{X}\right) \propto \prod_{i=1}^{n} p\left(y_i \vert \mathbf{X}_i, \boldsymbol{\beta}\right) p\left(\boldsymbol{\beta}\vert\alpha\right) p\left(\alpha\right). \end{align} Sampling from this distribution is usually achieved by Markov chain Monte Carlo, but that is not the approach we will adopt here.

In our experimental setup, we seek to replicate the parameters of Qiang and Liu. Specifically, we use twenty percent of the forestry covertype data as a test set (selected at random), we use minibatches of fifty randomly selected samples, we use one-hundred particles to sample from the posterior, we set $a_0=1$ and $b_0=1/10$, and we use a learning rate of $1/100$. The forestry covertype data can be downloaded from here. Lastly, we note that in the forestry covertype dataset the target variable is rescaled to $\left\{-1, +1\right\}$, which changes some of the mathematics from the usual binary class logistic regression formulation. Now I’ll demonstrate how Stein can be leveraged to sample from the posterior of a Bayesian logistic regression model.

For simplicity, I’ll split up the disparate components of the Bayesian logistic regression main.py and discuss each individually. To begin with, we’ll simply load the forestry covertype data.

Next, we provide Python code for computing the gradient of the log-posterior distribution over the linear coefficients and precision over those coefficients. It is important to note that because we are training the logistic regression model using minibatches, we need to rescale the likelihood component of the posterior by the ratio $n / n_{\text{batch}}$.

To evaluate the logistic regression model, we will consider the out-of-sample accuracy. Because we have multiple samples from the posterior, we average over the class-one probabilities before thresholding against $1/2$.

At this stage, all of the necessary components for training a Bayesian logistic regeression model with Stein variational gradient descent are in place. To sample from the posterior, we only need the following code,

Running this code obtains an out-of-sample accuracy of 75.677%, which appears to be competitive with the results reported by Qiang and Liu.

There has been a lot of recent interest in developing neural networks with well-calibrated uncertainties. For a good reference on this area, I suggest heading on over to Yarin Gal’s blog. The essential idea behind Bayesian neural networks is that we can place priors over the weights and biases of the network and derive a posterior distribution of weights and biases given observed data; this allows us to sample neural network parameters that explain the data well, but yield varying outputs on unseen data. This permits us to capture uncertainty in neural networks, which can be important for decision-making pipelines, adversarial learning, and other domains.

Before we apply our Bayesian neural network infrastructure to predicting Boston housing prices (a common test dataset), it is useful to consider the following toy example: Suppose we are interested in modeling a random variable of the form $y\sim\mathcal{N}\left(\sin 5x, \frac{1}{100}\right)$. If we observe a sample of fifty points, let us assume that we have a mechanism for sampling from the posterior distribution of weights and biases; then, because this is a simple one-dimensional regression problem, we can sample functions from the posterior distribution of neural networks and overlay them to characterize the uncertainty in the predictions. In the figure below, I’ve plotted fifty samples from this posterior alongside the training data and true underlying signal. 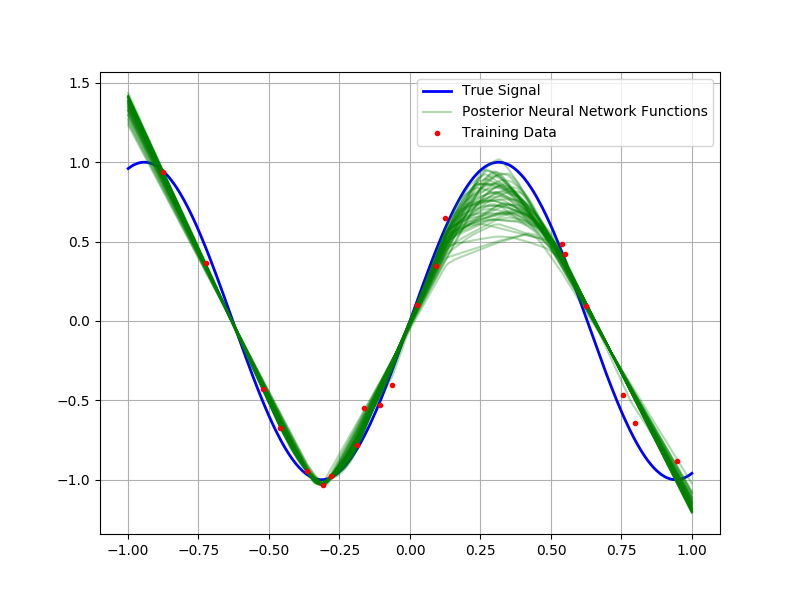 Notice how the different functions correspond to varying interpretations of the underlying data. Most of the draws explain the underlying data quite well, the variation in out-of-sample regions reflects the model’s uncertainty about the behavior of the underlying function. One also notices the abrupt changes in directionality of the interpolation; this is due to the RELU nonlinearity.

For demonstrating how to implement sampling from Bayesian neural networks with Stein I will not post the entire code (for that, please see here). However, I would like to point out that I utilize the automatic differentiation capabilities of Theano for computing the gradient of the log-posterior distribution. This is very convenient and unlikely to result in the mistakes of deriving the gradient by hand.

Automatic differentiation libraries such as Theano and Tensorflow make use Stein very easy from an implementation perspective. (My intention is for this to only get easier with time.)

There are several tricks that are being used in applying a Bayesian neural network to the Boston housing dataset.

The results of training the Bayesian neural network are summarized in the following table for a few chosen iterations of Stein variational gradient descent. By the ten-thousandth iteration, $\gamma$ selection on the development set has occurred, which drastically improves the out-of-sample log-likelihood.

The performance at 2,000 iterations looks to be comparable with the average performance stated by Qiang and Wang, and root mean squared error continues to improve after that point.

As I continue to write this series I will keep you updated on progress I make with the Stein library for Stein variational gradient descent. I would immediately like to look for applications of the methodology to interesting areas such as generative and reinforcement learning.

I am grateful to Qiang Liu and Dilin Wang for their open-source implementation of Stein variational gradient descent. Since I have borrowed and adapted aspects of their code for this post, in accordance with the terms of their license, their copyright is preserved below.

You may also enjoy: